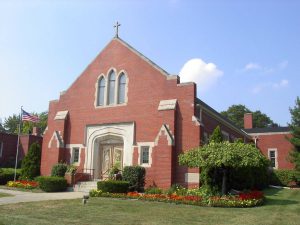 Established in 1925
Member of the English District, one of 35 districts of the Lutheran Church-Missouri Synod
Pastor David A. Rutter, MDiv, Concordia Theological Seminary, Ft. Wayne, Indiana, 1993.

St. Paul’s Lutheran Church is a caring congregation which seeks to remain faithful to the Word of God. Our message may be summarized in the words of the Apostle Paul, “For I determined not to know anything among you except Jesus Christ and Him crucified” (1 Corinthians 2:2.) You are always welcome to the weekly Services or any of our Bible classes and programs.

History of the Congregation

In June 1925, several eastside-Detroit congregations of the Lutheran Church-Missouri Synod English District, led by the Reverend A. H. Loeber, Messiah Lutheran Church, formulated plans to begin a mission in St Clair Shores, a township northeast of Detroit known as “the frontier.” On October 11, 1925, the first Service of many was held at “The Shores Inn,” a local roadside tavern. By late July 1926, lumber was delivered to several parcels of donated land, which comprise the current location, and the first building was erected just in time for the installation Service of St. Paul’s first Pastor, the Reverend Edward Kroencke, September 5, 1926. One month later — October 10, 1926, the congregation dedicated the new church building in a series of three Services. Within weeks of the dedication Service, the congregation established a Sunday School and a Ladies Aid auxiliary.

On November 1, 1929, St. Paul’s second Pastor, the Reverend Herbert Mueller, was installed, and served for 10½ years. During Pastor Mueller’s service a parsonage was built (1931) and a basement placed under the church building (1937.) On October 6, 1940, the congregation’s third pastor, the Reverend Norman Rieck was installed, and served for nearly 12 years. During Pastor Rieck’s service a school was formed (1942 -1962) and a four-classroom school building was built (1946), the lower level of which also served as the congregation’s new place of worship. In 1947 the original church building was purchased by the Redeemer Methodist Church in Harper Woods and moved to their parcel of land — a distance of 3 miles. They repurposed the building in the 1960’s to serve as their thrift shop. Sadly, the thrift shop — St. Paul’s first church building, was destroyed by arsonists in 2014.

Throughout the decades, some tumultuous and challenging, the Lord Jesus has blessed the St. Paul’s Lutheran congregation in St. Clair Shores with faithful pastors who preached and taught the Word of God, and faithful members who served in His Kingdom to the glory of His Name.

Subscribe to our Newsletter and keep up-to-date with all the events at St. Paul's Lutheran Church.